Increase in April 2021 exports was mainly driven by the exports of motor vehicles with USD 2.1 billion, machinery with USD 1.87 billion and iron & steel with USD 1.28 billion.

Germany was the top export destination for Turkey in April with USD 1.65 billion, followed by the US with USD 1.18 billion and the UK with USD 1.03 billion.

​​The Central Bank of the Republic of Turkey (CBRT) released reports of the Capacity Utilization Rate (CUR) of Manufacturing Industry and the Investment Tendency Statistics.

CBRT figures revealed the CUR of manufacturing industry inched 0.6 points higher in April 2021 compared to the previous month, aggregating a solid 76.2 percent in total. The CUR for intermediate goods manufacturing, seen as vital to foreign trade balance, rallied to a 78.8 percent, the highest since September 2018.

The figures are based on the resposes given to its Business Tendency Survey by local units operating in the manufacturing industry, according to CBRT.

Meanwhile, gross investment expenditures in 2020 increased by 26.3 percent annually, exceeding the expectation of 8.7 percent in the previous survey, announced CBRT in its Investment Tendency Statistics Report.

Additionally, the report revised up projections for 2021 investment expenditures, forecasting a 44.4 percent rise compared to 2020.

The Investment Survey is conducted by the CBRT in full compliance with the “Joint Harmonised European Union Programme of Business and Consumer Surveys”.​​​

In the first quarter of 2021, 61 startups raised USD 508 million from angel investors and venture capital funds, setting a record for the Turkish startup ecosystem.

According to Startup.Watch’s “Turkish Startup Ecosystem Quarterly Report-Q1 2021″, Getir became the second unicorn in Turkey with a valuation of USD 2.6 billion. Led by Dream Games, which received the highest investment after Getir, the activity in the gaming industry continued in 2021 with 15 gaming startups receiving USD 60 million investment in the first quarter.

Turkey ranked 10th in Europe and 2nd in the Middle East and North Africa angel and venture capital investment leagues. ​​​ 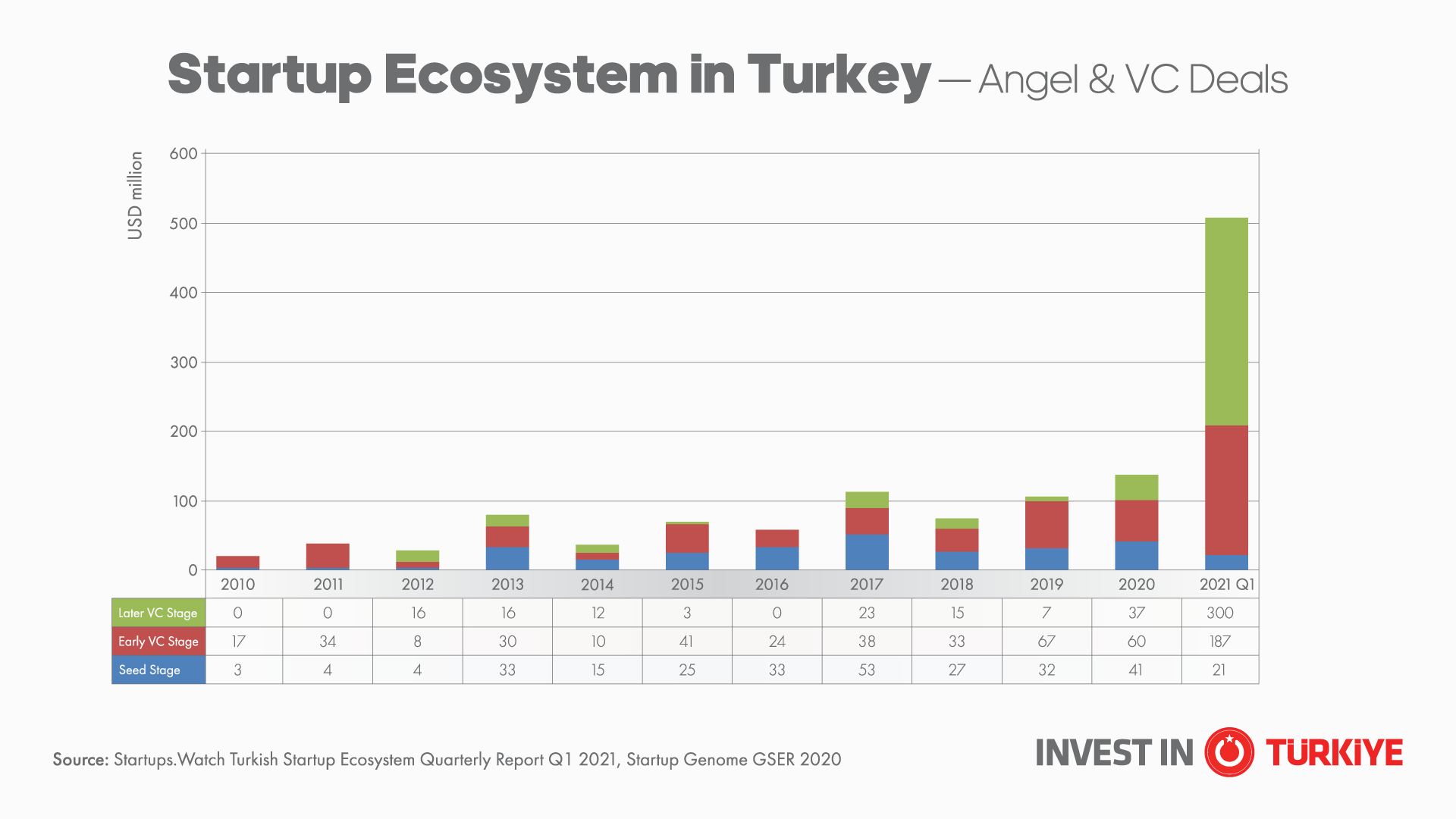 Turkey Climbs Up To 11th Place Globally In Terms of GDP

​​​The International Monetary Fund (IMF) has revised its GDP forecasts for countries around the world in its latest World Economic Outlook April 2021 report.

Accordingly, growth forecast for the Turkish economy has been revised upwards to 6 percent in 2021, up from 5.5 percent. With this, Turkey is among the top three emerging economies with the highest growth expectations for 2021 after India and China.​ 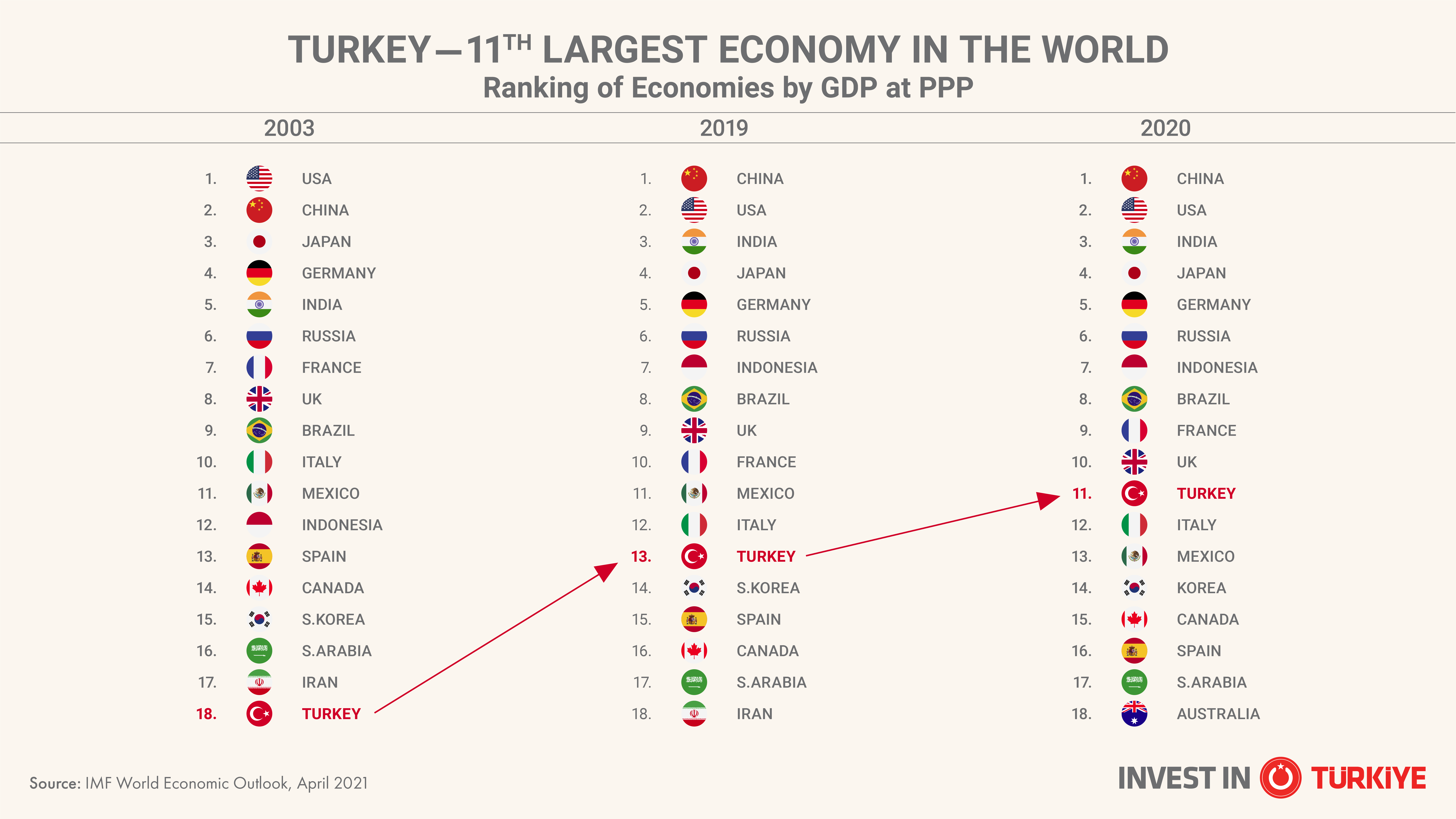 Turkish merchandise exports in the first quarter of 2021 increased by 17.25%, compared to the previous year

In March 2021, exports reached the highest monthly value (18 billion 985 million US dollars) in the history of the Republic of Turkey.

Source: Ministry of Trade and TURKSTAT

Figure 3. The Main Partners for Export and Import (Thousand US Dollar) 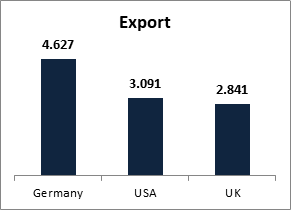 Source: Ministry of Trade and TURKSTAT

Central Bank of the Republic of Turkey Head Office

In 2020, Turkey’s merchandise exports decreased by 6.3% compared to the previous year According to the Domestic Goods Communiqué (SGM 2014/35), which was prepared by the Ministry of Industry and Technology in accordance with Article 63 of the Public Procurement Law No. 4734 and published in the Official Gazette dated September 13, 2014 and numbered 29118, TOBB approved 1,464 Domestic Goods Certificates in January 2021.​

​Frank Appel, CEO of the German logistics leader Deutsche Post DHL Group, pledged further investment in Turkey in his statement to Turkish media.
Appel said, “DHL is investing EUR 135 million to build a state-of-the-art operation center at the new Istanbul Airport. We are ready to enlarge our operations in Turkey as it offers great opportunities for investors to grow and enhance their export activities.”
Appel further stated that DHL will doubtlessly make new investments in Turkey in the future by adding more service centers and warehouses.
Airing his hopeful opinions on the global economy in the post-COVID-19 period, he said, “Despite the pandemic’s large devastating effects on all sectors, the consumer behavior has changed with the rise of e-commerce. We will see further increase in online sales and an acceleration in the B2B sector again in 2021.”

Minister of Trade Ruhsar Pekcan called on international investors to look out for opportunities in Turkey, addressing the questions of Anadolu Agency (AA).
Minister Pekcan underlined the fact that Turkey offers investors a wide range of incentives, particularly for innovation and technology-oriented investments in the specialized free zones (SFZs). “We plan to expand the SFZ model for other high-tech and high value-added industries in the future”, Minister Pekcan said. “It was initially rolled out for the software and information technology sector. But now I invite investors to consider offshoring to Turkey’s SFZs,” the minister added.
Turkey’s qualifications, including its competitive edge in logistics, young and qualified labor, robust manufacturing capabilities and highly developed infrastructure set her apart from other investment destinations, Minister Pekcan highlighted.