GfK’s long-running Consumer Confidence decreased three points in January to -45. Four measures were down, and one was up.

“After a short-lived and weak rally in Q4 last year, UK consumer confidence has slipped to -45 in January. Consumers have a New Year hangover – but it’s of the economic kind – with high levels of pessimism over the state of the wider economy. And unlike a conventional hangover, this one won’t vanish quickly. The only glimmer of hope in the results is a slight uptick in the outlook for our personal financial situation, but this is of little comfort because it is still 25 points lower than this time last year. This month’s six-point decline in the major purchase index does not augur well because consumer spending is a driving force of our economy and future growth. With inflation continuing to swallow up pay rises, and the prospect of some shocking energy bills landing soon, the forecast for consumer confidence this year is not looking good. One thing we can be sure of is that 2023 promises to be a bumpy ride.”

The Overall Index Score decreased three points in January to -45. Four measures were down, and one was up, in comparison to the December 16th announcement. 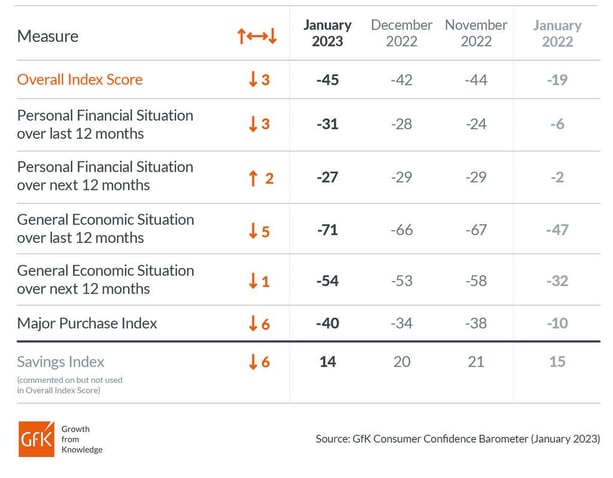 The index measuring changes in personal finances over the last 12 months decreased three points to -31; this is 25 points worse than January 2022.

The forecast for personal finances over the next 12 months increased to -27; but this is still 25 points lower than this time last year.

The measure for the general economic situation of the country during the last 12 months is down five points at -71; this is 24 points lower than in January 2022.

Expectations for the general economic situation over the coming 12 months are down by one point to -54; this is 22 points lower than January 2022.

The Major Purchase Index is down six points to -40; this is 30 points lower than this month last year.

The Savings Index is down six points this month at +14; this is one point lower than this time last year..